Reported on for a shamefully short time in the press, the Dominican Islands suffered hugely when hit by Hurricane Maria last month, late September 2017.

A group of local mums in South and East London who have relatives in the islands or who are originally from there decided that something needed to be done. They quickly formed the charity South London Aid In Dominica (SLAID) and started collecting as much as they could in the way of supplies and aid to send to the disaster-stricken islands.

When it came to getting those supplies to the shipping yard, Fantastic Services stepped in to help.

Big thks @Fantastic for stepping in & helping us get vital supplies to people in #Dominica 🇩🇲 Quick Response to our Emergency call! #Support pic.twitter.com/R6NpUKFeQY

As you can see, the effects are huge – and devastating. So when Jacqui, one of the charity’s founders, got in touch with Fantastic Services CEO Rune Sovndahl, he realised that sending some local teams out in support of the charity’s work was the least we could do.

South London Aid In Dominica is run by a group of local mums with relatives in the islands, or who were themselves born there. They’re absolutely dedicated to raising money and awareness of the ongoing effects which Hurricane Maria is having. These include people who have lost loved ones, homes – even access to running water and basic essentials.

Thank you to @Fantastic who have been….. well FANTASTIC & offered their services to us again this morning! 🙌🏾 #Dominica #dominicaStrong pic.twitter.com/2v89lWNqZu — Relief for Dominica (@DA_RELIEF) 27 September 2017

If you think you might be able to help, you can contact South London Aid In Dominica:

And they’ve offered to be of service again! pic.twitter.com/E9Az8pokCm

Disaster relief for the Dominican Islands

Fantastic Services’ support for the charity was provided by our Fantastic Removals team. We’ve so far undertaken three journeys collecting donations, water, toiletries, food and other supplies, and transporting it all to their shipping point.

Great day of good work for #Dominica🇩🇲 Thanks to all and especially @FantRemovals for making 3 trips with donations! 30 barrels & 9 pallets! pic.twitter.com/nzGYU5sQhf — SLAID (@Aid_In_Dominica) 2 October 2017

The charity will appreciate any and all assistance you can offer, from running a local event to volunteering a little time to collecting donations, or directly donating whatever you can to their relief fund. Please don’t hesitate to get in touch.

Curious how it all went down? See the gallery below! 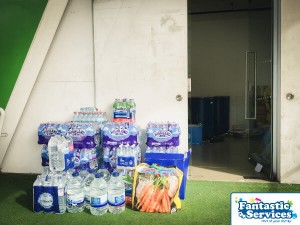